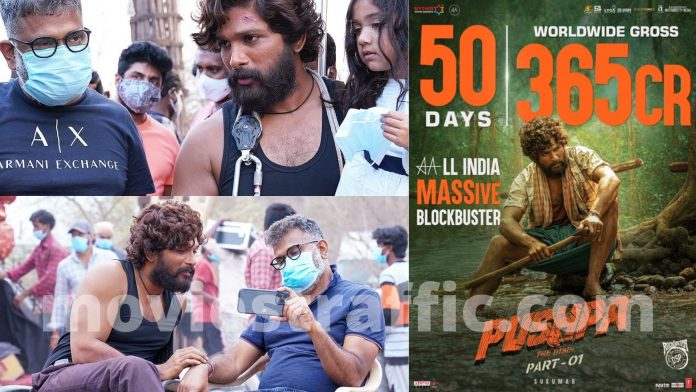 The Tollywood blockbuster movie Pushpa – The Rise has just become a box office hero. Telugu superstar Allu Arjun’s blockbuster Pushpa movie was released at the end of last year December 17, 2021. Since from the release date to today the movie has become a never-ending success.

Before the release of the Pushpa all, we know how popular & trending the songs became, and still the release of the movie was awaiting and however the choreography of the songs made each & every fan of Allu Arjun & Samantha gone more exciting that includes even the lead role actress Rashmika Mandanna. The expectation for the movie became higher among fans.

After the release of Pushpa just on the first day itself, it wins the fan’s & audience’s expectations and the movie became a blockbuster superhit of the 2021 year-end. The movie was originally released in the Telugu language and also the movie got dubbed and released into multiple languages such as Tamil, Malayalam, Kannada & Hindi.

Not only in the Telugu language even the movie became super blockbuster and popular in all other dubbed languages too. This hint was more enough for the creators to get the confirmation that Puushpa is the real box office Hero.

On the first day of release itself, the Pushpa movie got collected nearly 74 crores, and on opening weekend from all over worldwide, it got collected almost 159 crores that were a huge profit in Tollywood which was an India box office record. However, the budget of the movie is 200 to 250 crores. Now finally the movie grossed the box office collection to 365 crores worldwide for 50 days.

On Twitter, the Anti-Indian director Blue Sattai Maran just made a pride tweet of Pushpa’s box office collection by saying – “Pushpa is the real blockbuster”.