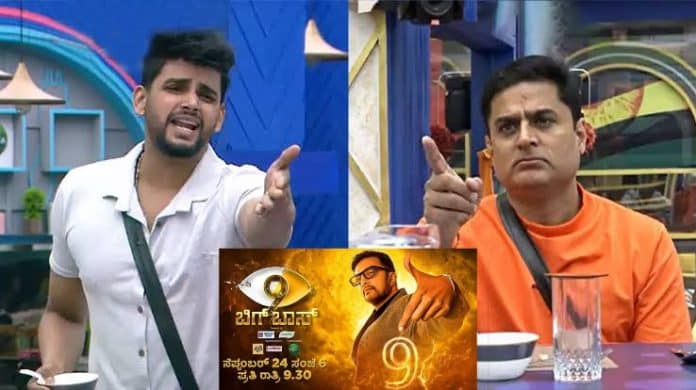 Bigg Boss Kannada Season 9 first episode was telecasted on 26th September on Monday at 9:30pm. While all were assuming the first episode to be normal and peaceful but indeed there was a high drama and heated arguement between Darsh Chandrappa and Prashanth Sambargi. But before this, there was an arguement going on between Aryavardhan Guruji and Prashanth Sambargi regarding the numerological science, where Prashanth kept on accusing that numerological sayings were fake and Aryavardhan is not his original name and was indeed forcing Aryavardhan to accept it.

But when Darsh questioned Divya Uruduga about the same, she accepted that she is aware of Prashanth Sambargi’s interview and his opinion of her. Not just Divya Uruduga, a few other housemates also agreed with Darsh. But inspite of all this arguements, Prashanth Sambargi was not at all ready to accept Darsh accussations on him but instead stated that there is a difference between pretending to be nice in front of them and bad-mouthing the same person elsewhere.

This is when Darsh won the arguement by mentioning Prashanth that “Its easy to note other mistakes, accuse them and forcefully make them to accept it, but when it comes to your faults, You just walk away. So this what is called as your ethics?”. As the arguement had come to an end, Darsh had got an negative impression from his fellow contestants in the house for creating such an chaotic environment on the first day itself. What do you think about Darsh accussations?