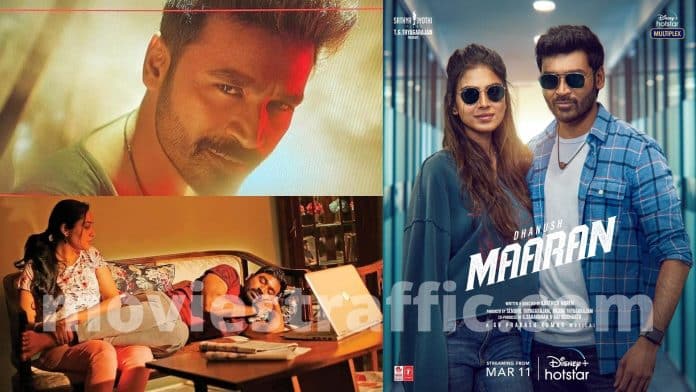 Kollywood actor Dhanush’s new movie named Maaran will be released on Hotstar today at 5 pm. The movie Maaran has high anticipation between fans where the Dhanush fans are more excited to watch his favorite actor’s movie after his previous release.

After his previous movie Atrangi Re, the fans were more eagerly waiting for Dhanush’s new movie, however, his previous Atrangi Re is a Hind language movie where the movie was cast by Bollywood actor Akshay Kumar and Dhanush in the lead roles. Even though the movie was starred and collaborated with two popular Indian actors who are from Kollywood and Bollywood still fans were expected something special in the movie.

After the release of Atrangi Re, there were huge disappointments were seen among Dhanush fans, one side even though fans were happy to see Dhanush in the Bollywood movies on the other hand fans were not happy with the script of the movie. There were talks where the fan’s expectations just got broke for the movie Atrangi Re.

However, fans were still expecting very strongly Dhanush’s next movie is really going to be entertained better than his previous movie Atrangi Re. The Dhanush next movie after Atrangi Re is Maaran where this was the movie fans were eagerly waiting for the release.

Now the wait is over and also for many Dhanush fans who are not ready to go and watch this movie in the theater they can now watch and enjoy his favorite star movie on the OTT platform. The creators of Maaran movie are releasing the movie directly on the OTT platform instead of theaters. So that all the fans can enjoy watching Maaran’s movie on Hotstar.

To watch this movie Maaran on Hotstar all you need is a subscription. If you are an existing Hoststar subscriber you can stream this movie on Hotstar at 5 pm. For the user who is not subscribed on Hostar, you can just buy their basic subscription pack and you can watch the movie along with this new movie the Hotstar subscribers can also enjoy watching other latest movies that are already streaming on Hostar.