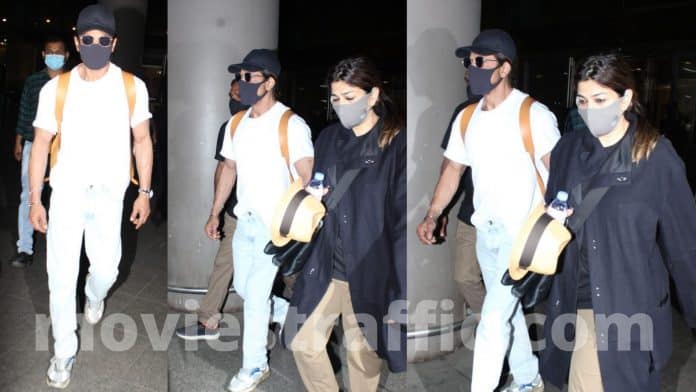 Superstar Shah Rukh Khan has finally completed his international shoot schedule in Dubai for his much-awaited film ‘Pathaan’. Thursday morning he got spotted arriving back in his hometown Mumbai and spotted with a cool airport look in Airport.
In pics, Khan was snapped wearing a white T-shirt along with blue denim pants. He also used to look stylish with his black cap, sunnies, and a black face mask along with his travel backpack OOTD. While he was escorted by his team to the car, he also greeted the airport staff at the terminal by shaking hands and hugging them before entering his car.

After the pack-up of the international shoot, SRK left off Dubai and his co-stars Deepika Padukone and John Abraham also returned to Mumbai with full satisfaction of wrapping the international schedule of Pathaan. In the pic below, Khan was spotted with his black summer shirt under a hoodie in a mall in Dubai and discussing with his bodyguards.

Apart from this, a few more pics of Shah Rukh Khan rolling on the Internet which has a glimpse of Pathaan movie shoots. It is claimed by the fans fraternity, the above pic was clicked a day before SRK returned to his hometown.

John Abraham thought he can finish his part of the shoot by December but now it went on delayed and he could finish it in April, he also refuses to share the details about ‘Pathaan’, director Siddharth Anand had planned for Spain to schedule some more action shots and it became happy news and all the cast and crew were thrilled to travel to Spain. The Director of Pathaan assured us that the movie will be a treat for SRK Fans, Deepika Fans, John Abraham Fans.

Rumors spread that the screening of Pathaan will be on January 25, 2023. Let us wait for the best.