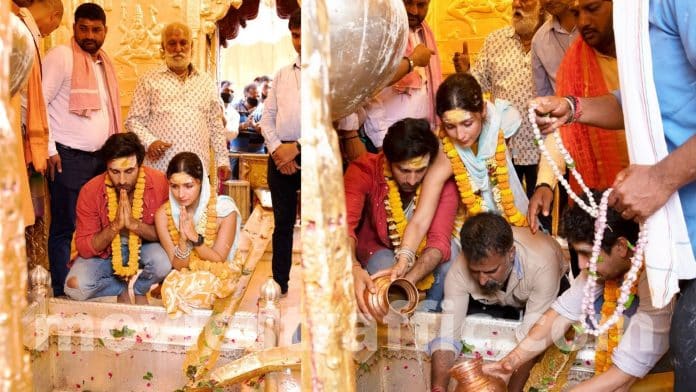 Ranbir Kapoor and Alia Bhatt had finally decided to exchange their ring at the particular place. They had decided to tie the knot in the middle of April. Exclusive details are below.

Ranbir Kapoor and Alia Bhatt have already finished the final shoots of Ayan Mukerji’s Brahmastra. So, this is what they decided to do next. With their upcoming movies lined up and keeping in that mind, they knew that their wedding is also important to their future. Ranbir and Alia Finally Decide to tie knots in Mid April and the place will be?

Where Will RANBIR-ALIA Tie Their Knot?

The rumors came from the people who are close to the couple said, Ranbir Kapoor and Alia Bhatt have decided Udaipur as the final destination for their wedding. The location will be at the Taj Lake Palace in Udaipur. However, there is no official confirmation on the wedding place by the couple.

Alia Bhatt completed her film RRR promotions which were with Jr NTR and Ram Charan. The film was released on 25th March 2022, breaking many Indian Movies Box Office Records. Next, Alia will be screened in Brahmastra with her husband Ranbir Kapoor. The film crew had decided to release the film post-marriage and set the data on September 9, 2022. Alia Bhatt also has Darlings and Rocky Aur Rani Ki Prem Kahani lined up for the future after marriage.

Next, Ranbir will be screening on Shamshera with Vaani Kapoor and Sanjay Dutt. Ranbir also has another movie titled Animal, next untitled film co-casted with Shraddha Kapoor and Luv Ranjan, and Brahmastra scheduled for release on 9th September 2022.